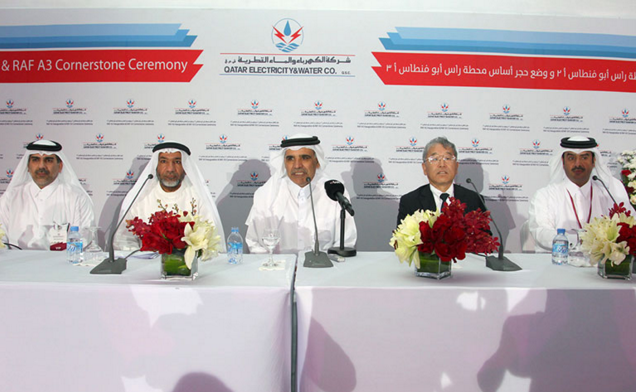 Al Mohannadi was speaking during the inauguration ceremony of RAF A 2 station which is accompanying with laying the foundation stone of RAF A 3 station are considered a paradigm shift in the station operation where RAF A3 will operate desalination, for first time, through Reverse Osmosis system.

He said that RAF A 3 station, which its foundation stone was laid by HE the Prime Minister and Minister of Interior Sheikh Abdullah bin Nasser bin Khalifa Al-Thani, will be completed at the beginning of 2017.

“Since the company was established 25 years ago, the company placed the fundamentals that necessary for developing all its stations in state of Qatar and abroad in particular Ras Abufontas station which is considered the key element of electricity generation and water desalination in the country.

“RAF has been established in phases and it has been developed and expanded by adding RAF B, B1, A1, A2 and now A3 while the overall production capacity of electricity and water amounts to 60% of the total needs of the country and this station is supplying the networks that reaching various areas around the country including Mesaieed industrial city.” In his speech he said, “We are here today to celebrate laying the foundation stone of RAF A 3 project as well the Inauguration of RAF A 2 project which are both considered a paradigm shift throughout the station history for various reasons such as: once the operation of the existing station is ended, the old station will be replaced with a new one to supply the same areas that used to be supplied by the old station, therefore it was important to maintain the same production quantity of this station in a manner that meeting the country satisfaction of electricity any water.

“The other issue is that this station is operating based in a very advanced technology than the previous technology where the thermal efficiency of this desalination is very high comparing with the thermal efficiency of the old station which will produce big quantity of water with less size than the old one and also help in reducing the temperature of the water returned to the sea which has a positive impact to the environment.

He added that the Reverse Osmosis system, which is experienced for more than 30 years, has various advantages; low cost by 40% than thermal desalination stations as well the water retuned has no any thermal impact to the sea water comparing with the thermal desalination. Moreover, such station is fully independent of the generation station therefore it can be operated without using the Gas Turbine which will reflect positively in securing the water supply to the country.

“This technology is considered the upshot of the close cooperation between Qatar Electricity and Water Company and Qatar General Electricity and Water Corporation “KAHRAMAA” where this technology has been exhaustively studied and approved to be commercially used for first time in State of Qatar.” Qatar Electricity and Water Company is considering that its participation with the international companies is the foundation of success and continuity of its activity to higher levels, he said, pointing out that the company intends to enter into partnership in several stations either in the state of Qatar or abroad which is achieved through establishing more than 6 local companies and one international company named Nebras Power. The cooperation with Mitsubishi, the company executed RAF A2 and currently undertaking RAF A3 as well as investing in Umm Al Houl Power, is the result of the cooperation with the foreign companies whereas Mitsubishi is operating in Qatar for more than 40 years since establishing the first phase of Ras Abufontas.