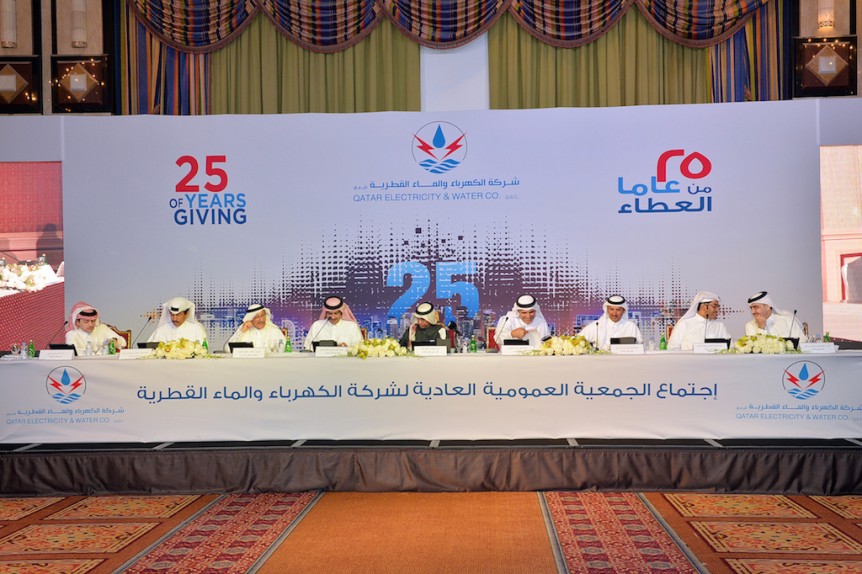 DOHA: Qatar Electricity and Water Company (QEWC) yesterday held its Annual General Assembly (AGM) and approved the Board of Directors’ recommendation to distribute a cash dividend of QR825m (about $226.55m) to its shareholders for the last financial year ended December 31, 2015.

The board had decided to offer a recommendation to the General Assembly to approve the distribution of cash dividends to shareholders, equivalent to 75 percent of the nominal value of the shares, same as last year. There was no growth in the amount of dividend in 2015 as QEWC distributed the same amount of dividend (QR825) in the previous year (2014). The earnings per share (EPS) for the year 2015 stood at QR13.64, which is marginally lower compared to QR13.91 in 2014.

The meeting approved the QEWC’s Annual Report of the Board of Directors for the company’s activities and financial results for the year 2015 and future planned investments and the company’s financial position for 10 years.

The AGM also approved the offers of audit firms and adopted the recommendation to appoint auditors for the year 2016. The Board discussed developments in the company’s various projects which are under construction and under review. The major projects discussed at the meeting were Ras Abu Fontas (A-3) (project is in progress), Umm Al Houl Power and Lusail Tower Project.

The Board also discussed QEWC’s foreign investments in power and water projects through Nebras Power where QEWC owns 60 percent shares.

The Assembly also reviewed the status of solar power project for which QEWC signed a MOU with Qatar Petroleum to establish a company for building solar power plants in Qatar.The Peninsula