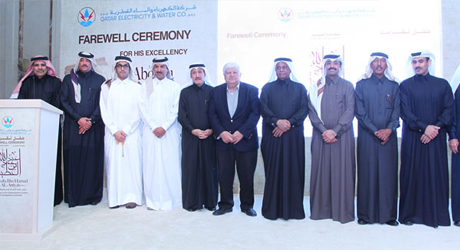 Doha: Qatar Electricity and Water Company (QEWC) organised a ceremony to honour Administrative Control and Transparency Authority Chairman H E Abdullah bin Hamad Al Attiyah, former chairman of QEWC board of directors, for his efforts towards the design and implementation of the company’s public policy.

QEWC leaders, board members and staff were present.

The Minister of Energy and Industry and Chairman of QEWC H E Dr Mohammed bin Saleh Al Sada expressed pride to honour Al Attiyah and said the former chairman’s efforts during his tenure helped QEWC earn the privileged position it has reached.

He praised Al Attiyah’s achievements not only as the chairman of QEWC but also over 40 years of hard work and continuous effort.

exchairmanHe said he worked with Al Attiyah for more than 20 years in the oil and gas sector and witnessed his firmness and courage in decisionmaking, and international recognition for his contributions.

“He was the guide and the teacher, and he is today the big brother and dear friend for whom I have all the love, respect and appreciation,” Al Sada said.

Over four consecutive sessions, Al Attiyah as chairman of QEWC, devoted attention to develop plants and establish new ones and projects and engage in investments and profitable partnerships.

Thanks to his efforts, QEWC has become one of the leading power and water desalination firms in the region. It doubled its assets and increased annual earnings exceeding paid-up capital, which positively impacted on the distribution of profits to shareholders, Al Sada said.

Al Attiyah expressed pleasure over QEWC’s development and growth during his chairmanship and said it had never been the result of individual effort, but was the fruit of joint work and cooperation between all members of the board. He praised the Father Emir and the Emir H H Sheikh Tamim bin Hamad Al Thani for support and motivation which were the main reason behind the company’s progress and development. He also thanked the QEWC board and staff for their hard work to achieve the company’s goals.