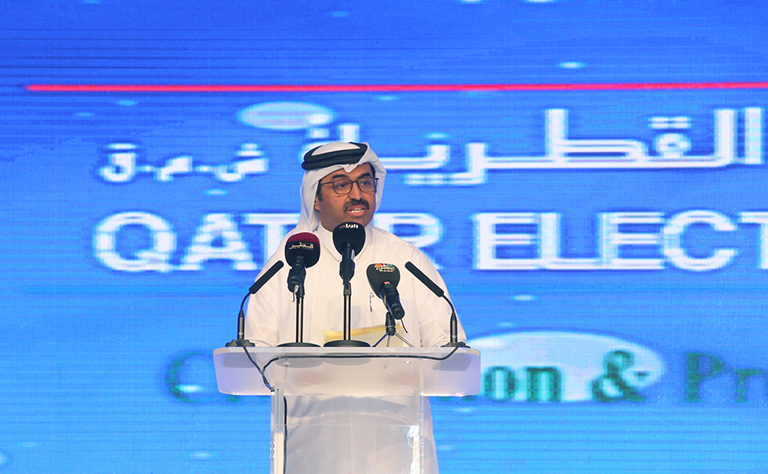 Doha, April 18 (QNA) – HE Minister of Energy and Industry Dr. Mohammed bin Saleh Al Sada said the opening and operation of the Ras Abu Fontas (RAF) A3 station in the given time and within the expected budget confirms Qatar’s water and electricity companies’ role in contributing to achieving water security in the country.

During the launch event of the station’s expansion, HE the minister and the chairman of Qatar Electricity and Water Company (QEWC) said the project represents a leap in the quality of water production using Reverse Osmosis (RO) technology, which is distinguished by its low cost and complete independence from the electricity generation process. RO is also environmentally friendly since it has no heat effect on sea water as oppose to the tradition process of water production, thermal distillers, HE the minister added.

The expansion is set to provide 36 million gallons of desalinated water per day, making RAF’s water production cover 60 percent of the country’s requirements of water, His Excellency said.

HE Dr. Al Sada added that when Umm Al Houl station becomes functional mid of this year, the water production using RO technology will reach 100 million gallons of desalinated water per day, making Qatar the highest water producer in the region using this technology. Energy production in Qatar will increase from 8,600 megawatts to more than 11,000 megawatts in one year, as well as more that 530 million gallons of desalinated water daily, once the full production of Umm Al Houl station is counted during the second quarter of 2018.

The private sector were involved in every phase of the expansion project of RAS A3 under Qatari supervision following global standards through national employees represented by project managers, a number of engineers and technicians who supervised the project from the very beginning, HE Dr. Al Sada said.

The project also paid attention to using the highest global standards of safety and security, where the more than 2,000 labors and employees with different specialties covered nearly 8 million hours of work with no accidents, HE the minister added.

HE Dr. Al Sada said RAF A3 is one of the desalination projects made as an implementation to the strategy set by the Qatar General Electricity and Water Corporation (Kahramaa) to achieve the ideal mixture for desalination technology in Qatar. Where as this vital project uses RO, for the first time in Qatar to secure sustainability of desalination water supply for the country’s different facilities.
Following the directives of HH the Emir Sheikh Tamim bin Hamad Al-Thani and in correspondence with the goals of Qatar National Vision 2030, the governments always works towards securing the necessities of sustainable development in line with the rapid growth witnessed in the country, the minister added.

The ministry is well aware of the responsibility and importance of water and electricity to accomplish any residential, industrial or commercial projects, hence it works around the clock and anticipates the current and future needs of the country in those main elements and provides it to any project before its completion, the minister said.

He added that the ministry works on supporting and developing the water and electricity sectors by encouraging the involvement of the private sector; through establishing electricity generation and water desalination projects to provide the needs of economic developments and infrastructure in the country, and to keep up with the growing demand of water and electricity.
The minister praised the efforts of the global companies to complete the project, in addition to the local construction companies, Kahramaa and QEWC’s teams.

General Manager and Managing Director of QEWC Fahad Bin Hamad Al Mohannadi said RAF A3 is the first commercial water production project in Qatar to use the RO technology, producing 36 million gallons of desalination water daily and costing nearly $500 million. This special technology has been used for 30 years and it is the most cost effective, ecofriendly and works independently which positively reflects on guaranteeing water supply to the country.

Al Mohannadi said the company was keen to benefit from the state-of-the-art environment-friendly technology in electricity production and water desalination as well as following the highest global standards of security and safety in the execution of projects, which qualified it and its subsidies to land several global awards in the fields of environment and safety.

He said the company will continue to develop its capacities in electricity production and water desalination in the country, while ensuring that its work is convenient for the environment by investing in high-quality plants of low emissions such as building solar plants in implementation of the vision of HH the Emir Sheikh Tamim bin Hamad Al-Thani and to enhance the international status of Qatar in the use of alternative energy and diversifying the sources of electricity in line with the highest environment standards locally and globally.

Al Mohannadi pointed to cooperation with Japanese firm Mitsubishi, which executes the Ras Abu Fontas A3 Water Desalination Station, as well as the participation in Umm Al Houl energy project along with leading global firms indicates the strength of the Qatari economy and the keenness of international firms to effectively participate in the electricity production and water projects in addition to the Qatari financial sector that was able to provide all necessary loans for the project through the local banks of QNB, Commercial Bank Qatar and Masraf Al Rayyan.

Katsuya Nakanishi, the regional chief executive officer of Middle East and Central Asia and senior vice president at Mitsubishi Corporation, said the Japanese firm along with its partners managed to execute the project according to the schedule, which, he added, is the shortest ever period to carry out a project of that size.

He added that Mitsubishi will continue through its presence in Qatar and with its strong partners to enhance its commitment to the country through the use of best technologies to present the best competitive solutions.
For his part, Hironobu Iriya, the board chairman and CEO of Thai firm TTCL, expressed gratitude to work on the Ras Abu Fontas A3 Water Desalination Station, highlighting the cooperation with partners to execute the project according to the time frame.

He said the execution was done in line with QEWC directives to ensure the success of the project, which meets the needs of the country of electricity and water so as to achieve sustainable development.

HE the minister of energy and industry said that needing water and electricity is vital to economic and social development, referring that the RAF A3 expansion projects holds many features, mainly as it is part of the plan that supports the Qatar National Vision 2030 that was launched by HH the Emir. In addition, the project was completed within its timeframe, within the set budget, with a high safety record, and it also supports the expansion of the residential, industrial and commercial sectors.

The ministry confirmed that Kahramaa’s plan aims to provide water and electricity before the need for them in terms of generation, transport and distribution. Facility A project is currently being researched in its first phase, as well as the solar power plant which is of the established strategies of the country for the use of renewable energy and will have a production capacity of 500 megawatts, where 200 megawatts will be produced in the first stages, followed by the other stages until access to full energy is achieved.

The minister clarified that currently both projects are in the implementation phase. General Manager and Managing Director of QEWC Fahad bin Hamad Al Mohannadi said the current RAF A3 expansion is the last in the 40-year old station, and in the future the stations will be stopped or a study on the possibility of building new stations, whether in the field of electricity or water desalination.

Al Mohannadi added that any water produced undergoes at least a 15-day testing period and three levels of quality control. Kahramaa owns a complete and internationally approved device for testing drinking water as well as the Ministry of Health has an independent device for testing water, in addition to an international third party that is assigned for this task, after the approval of all three entities, the water is pumped for use.

Water from RAF A3 has been pumping into Qatar’s water networks for more than a month, the same goes for Umm Al Houl station, has been pumping drinkable water that conforms to international and local standards.
Kahramaa President Essa bin Hilal Al Kuwari said Kahramaa set a plan to expand electricity and water power generation networks, where the new station Facility A will be launched this year. Facility A is currently in the phase of preparing tender documents, and QEWC is a main partner in the station, he added.

Al Kuwari said that construction documents for an electricity generating station and other accompanying private projects are currently being prepared, where the QEWC is also a main partner. He added that any generating station is accompanied by expansion distribution networks and is within the completion timeframe and set budget.

The Kahramaa president said there are plans to expand the water and electricity network in the country, adding that any new plants are followed by energy and water distribution grids. Contracts were recently signed for the 13th phase of the transport network expansion at a total cost of QR 8.3 billion along with the QR 17-million mega water tanks project, which is currently in the advanced stages of increasing Qatar’s storage capacity of water for more than seven days. (QNA)