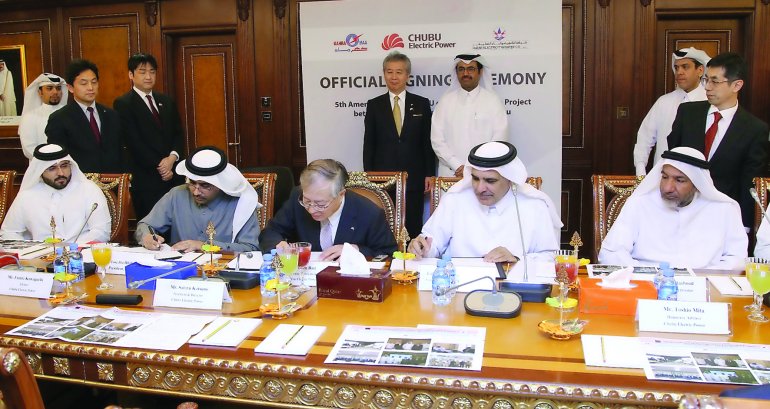 Qatar Electricity and Water Company (QEWC), Qatar General Electricity and Water Corporation (Kahramaa), and Japanese Chubu Electric Power Company signed the 5th amendment of the memorandum of understanding (MoU) of ‘The Partnership Project’ among them.
The MoU was inked in the presence of the Minister of Energy and Industry H E Dr Mohammed bin Saleh Al Sada, at the Ministry’s headquarters.
It was signed by QEWC Managing Director and General Manager Fahad bin Hamad Al Mohannadi; Kahramaa President Essa bin Hilal Al Kuwari, and Kozo Ban, President of Power Generation Company.
The MoU, which takes effect from April 1, 2017 to March 31, 2019, coincides with the 10th anniversary since the first signing in 2007. The renewal of the partnership project between both sides takes place regularly every two years. In a speech on the occasion, Dr Al Sada said that the 5th amendment of the MoU today (yesterday) cements the existing partnership between the parties and paves the way for further cooperation in the exchange of technical expertise and the development of Qatari human resources.
The Minister of Energy and Industry commended cooperation between the two countries as well as the strong partnership between Qatargas and Japanese Chubu company at the level of Qatari liquefied natural gas delivery to Japan, which marked its second decade, reports QNA.
The main theme of the amendment of the MoU is that QEWC and Chubu will continue to work together on themes such as “the improvement measures for Safety Management and Maintenance Quality, and the promotion of environmental protection”.
While Kahramaa and Chubu will continue to work together on “Substation”, and launch “Quality Control and Documentation Method”, “General Safety Management”, and “Learning and Development of Human Resources” as new themes.

Minister of Energy and Industry H E Dr Mohammed bin Saleh Al Sada (standing at the back) witnessing the signing ceremony for the 5th amendment of the MoU of ‘The Partnership Project’ among QEWC, Kahramaa and Japan’s Chubu at the Ministry’s headquarters, yesterday.
In the next term, QEWC, Kahramaa and Chubu will focus furthermore on “Human Resource Exchange”. The Number of visits between Qatar and Japan will increase more than ever before, as all related parties work together to promote The Partnership Project.
Since February 2007, QEWC, Kahramaa and CHUBU have renewed the Partnership Project regularly every 2 years, and the Partnership Project has auspiciously marked the 10th anniversary.
QEWC, Kahramaa and Chubu commenced the Partnership Project, in order to contribute to the further development of Qatar, through cooperation and advice in the electricity sector.
Chubu , as the First Buyer of Qatari LNG in the world, commenced receipt of deliveries of LNG from Qatar since January 1997, with the continuous support by the Ministry of Energy and Industry.
Chubu wished to strengthen the relationship with Qatar in various fields, based on the excellent relationship with Qatar cultivated through the long history of LNG transaction.
Talking to reporters on the sidelines of the signing of the 5th Amendment of the MoU, Kahramaa President said that this year will see the launch of a new tender for the construction of a solar power plant with partners – Qatar Petroleum and Qatar Electricity and Water Company. The plant will produce 500 megawatts and is expected to become operational in 2019 or 2020.