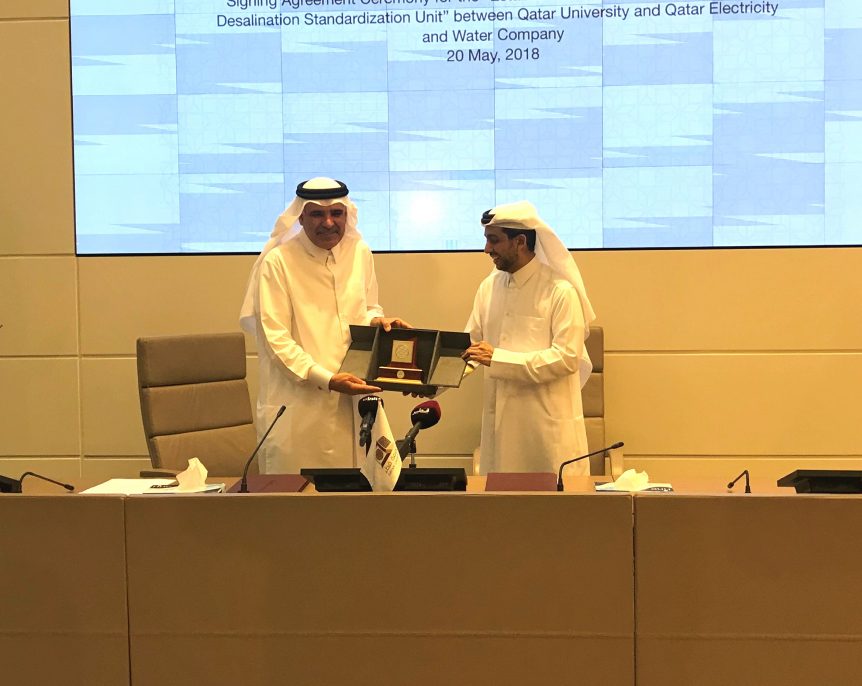 QNA/Doha
Qatar University and Qatar Electricity and Water Company (QEWC) have signed a co-operation agreement to establish a quality calibration unit for the treatment and desalination of seawater under the umbrella of the university’s Centre for Advanced Materials (CAM).

Under the agreement, QEWC will finance the establishment of a quality calibration unit for seawater treatment and desalination for three years.

CAM, meanwhile, will carry out specialised research in the field of pre-treatment and post-desalination technology and provide consultation whenever necessary to evaluate the work and safety of reverse osmosis plants operated by QEWC.

The centre will also diagnose water treatment systems and conduct data analysis to ensure that they conform to specifications.

it will also build national expertise and capabilities through training and rehabilitation programs for QEWC employees.

Dr al-Derham said it is not the first agreement between the two sides.

He noted that the agreement puts QEWC at the forefront of beneficiaries of the university’s expertise and capacities in this field.

Qatar University president added that the agreement is complementary to the memorandum of understanding signed by the two sides in April last year to enhance co-operation in water-related research.

He noted that the partnership between them is old as they carried out joint research on numerous occasions.

For his part, the QEWC general manager highlighted the constructive co-operation between the two sides in the field of water desalination and related research, pointing out that water is one of the most vital sectors for the state.

Al-Mohannadi added that QEWC is in a constant battle to deal with the changing reality of water, the chemicals used in its desalination and distribution, and the types of associated diseases, which, he noted, requires a joint effort between the company and Qatar University.

He stressed the importance of establishing a water centre at Qatar University to be concerned with water studies in the same way as the gas centre and other entities established by the university in the different fields of science.