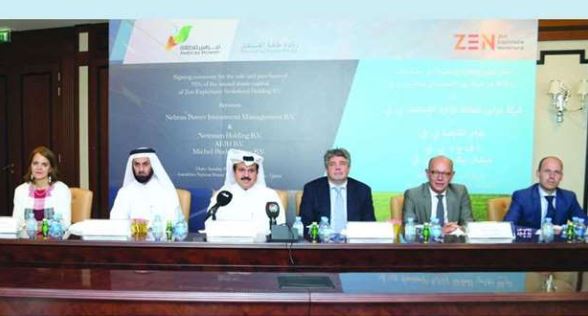 Gulf-Times : The acquisition provides Nebras with access to the attractive and fast-growing Netherlands renewable power market and is in line with Nebras’ stated objectives of establishing itself as a leading international power developer.
In this regard, Nebras Power Investment Management has signed a binding agreement in the presence of Netherlands’ envoy Dr Bahia Tahzib-Lie, who highlighted the growing economic ties between the two countries.
At present, Zen has 96MW of solar capacity in operation and the company intends to grow further, taking advantage of the supportive policy of the Netherlands government.
According to political agreements, the share of sustainable energy in The Netherlands should be at least 14% in 2020, thus offering promising potential.
In the Netherlands, Zen is the leading company in the field of sustainable solar energy projects and has already undertaken many large-scale projects, such as field installations in Great Britain and solar panels on farms and indoor ski buildings in Germany.
Zen is joining the growing portfolio of Nebras assets spread from Europe to the Middle East and South East Asia.
“The acquisition by our Dutch affiliate of a controlling stake in Zen is the first step in the direction which we have planned since the very inception of Nebras four years ago,” according to Fahad Hamad al-Mohannadi, chairman of Nebras.
Asserting that Nebras’ intention is to become a grass-root international power developer; he said the Zen transaction would confirm this strategy and at the same time provide diversity to its portfolio.
“We will continue building our international presence and forming partnerships with local operators with whom we can achieve rapid growth,” Nebras chief executive power Khalid Mohamed Jolo said without disclosing the monetary details regarding the size of the deal.
The acquisition adds to Nebras’ existing solar portfolio: the largest operating independent power producer in Jordan, Shams Maan, and AM Solar, under construction, he highlighted.
Zen chief executive Michel Peek said the agreement brings it to a completely new level as a developer, EPC contractor and operator, and will support the deployment of an ambitious growth strategy in solar energy projects in the Netherlands to become a European market leader.
“We look at Zen primarily as an excellent new business development opportunity, building on an already sizeable base, in a rapid growing market. Zen will provide Nebras access to its local development team, local knowhow and deal pipeline,” said Faisal al-Siddiqi, business development director, Nebras.