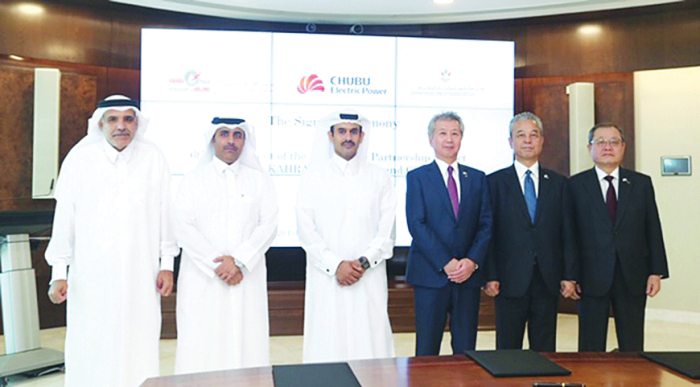 Tribune News Network
Doha – Qatar General Electricity and Water Corporation (Kahramaa), Qatar Electricity and Water Company (QEWC) and Japanese Chubu Electric Power Company recently signed the 6th renewal of the memorandum of understanding (MoU) of ‘The Partnership Project’ in the presence of Minister of State for Energy Affairs HE Saad Sherida al Kaabi.
The MoU was signed at Qatar Petroleum Headquarters by Kahramaa President Essa bin Hilal al Kuwari, QEWC Managing Director and General Manager Fahad Hamad al Mohannadi and President of Power Generation Company – Chubu Electric Power Satoshi Onoda.
The signing was also witnessed by Chubu Electric President and Director Satoru Katsuno.
Under the terms of the renewed MoU, Kahramaa and Chubu will continue to work together on substation issues, learning & development of human resources and general safety management, and smart meter and customer service while QEWC and Chubu will continue to work together on the promotion of environmental protection and on the improvement of safety management and maintenance quality.
The agreement also places emphasis on cooperation and the exchange of expertise in the field of human resources.
The partnership project consists of two working groups: one for the power system between Kahramaa and Chubu; and the other for generation technology between QEWC and Chubu.
Kahramaa, QEWC and Chubu commenced the Partnership Project in order to contribute to the further development of Qatar through cooperation and advice in the electricity sector.
It is worth mentioning that Chubu is the first buyer of Qatari LNG and had been receiving Qatari LNG deliveries since January 1997.